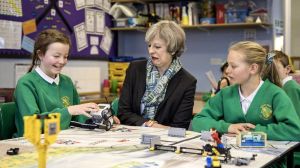 I note that on a secret* election trip Theresa May (my blog) who is averse to questions and will always reply with two words starting with s caused an eggs and flour shortage somewhere secret which is kind of creepy being she is the capitalist and you expect queues for food in soviet russia (historic) or north korea today provided it is not food aid provided by its enemies..

These eggs and flour items where deemed terrorist bomb making equipment while citizen may was in town secretly and possibly performing as a childrens party entertainer.   Quite what this says about capitalism is left to you the reader to imagine

It becomes rather amusing when politicians failings make news rather than the message with the same two s words in.

I hope nobody starved.

citizen may the children’s entertainer

I offer a free banana skin as a prize which you can collect from the zoo if you wish to comment with the magic words starting with s.  Something Comrade May likes too! assuming she is vegan.

However as banana skins can have a comedic value i am sure a law will be passed by her party banning bananas in the future as is what politicians do .

So if you ever have to entertain Thresa May you know eggs and flour are off the menu. Quite how this clergyman’s daughter** is so intolerant to eggs and flour is an exercise left to you the reader.

*also know as children’s party events ** clergymen see the worst of society a lesson learned by there family members as well.